Sasha Bezuhanova: “We Need to Change the Attitudes about Women’s Role in the Transition to the Automation”

The SHEleader@digital 2020 Conference has given seven perspectives for women’s contribution to the economic and social processes of the future. *

Leading European and US digital entrepreneurs, new media artists, and green innovators have gathered in the Bulgarian capital Sofia to discuss one of the most important topics today – the role of women in the age of automation. The second edition of the European conference SHEleader@digital, organized by the Bulgarian Center of Women in Technologies (BCWT) and MOVE.BG, took place on September 17 and 18. It was held in a hybrid format – on-site and online – due to the measures for limiting the coronavirus.

Sasha Bezuhanova, founder of MOVE.BG, opened the conference and outlined the challenges that the transforming, digitally-connected world poses.

“Why should we focus on women?

Because the imbalance between women and men in the digital economy is very big and we have to act today.”

In support of this thesis, Ms. Bezuhanova pointed out that nowadays in Europe women are only 17% of the employees in digital companies and 34% of STEM graduates. Moreover, on a global level, only 20% of startups are founded by women.

BCWT has worked to change the perspectives over the past eight years by motivating more women to take professional roles in the digital economy and supporting the next generation of women entrepreneurs.

According to the SHEleader@digital 2020’s participants, the lack of engineers and IT specialists is another significant challenge in the transition to automation. Today, there is a shortage of 700,000 engineers in Europe, who are urgently needed to address the digital economy development. It is important to overcome the barriers and attitudes, especially the traditional perspectives on male-female professional roles.

In this context, SHEleader@digital sought the dimensions of female leadership authenticity and built a bridge to the new generation of women entrepreneurs. It is not a coincidence that Sofia became the capital of this dialogue because there is one statistic by which Bulgaria is an EU leader. Our country has the highest percentage of women in ICT – 31%.

The EU Commissioner Maria Gabriel, who is the patron of the conference, confirmed that the topic about the women’s role in the age of automation is on the top of the European Union’s agenda.

“We know the statistics, but we have to point out the concrete actions. We have to act now in a more concrete and effective way,” Ms. Gabriel said and presented the tools which she as a Commissioner can use to implement policies that can really  change negative trends and education named as one of the most important fields.

“72% of girls aged 10 to 15 want to do something useful that has a positive social effect. We need to convince girls that they can be useful,” – this is a force that can change the world said Chiara Corazza, the executive director of the Women’s Forum for the Economy and Society.

SHEleader@digital 2020 focused on seven perspectives for women’s contribution to tomorrow’s economic processes. The forum stipulated that women can play key roles in managing the deeptech economy not only with engineering but also with management functions. And also that they have the potential and talent to take on more leadership roles in the industries of the future and in those related to green transformation.

The event also discussed the participation of women artists in the new territory, born of the meeting between technology and art, which is less burdened with the understanding of traditional male-female roles.

Sasha Bezuhanova emphasized the need for a fundamental change in the approach to the topic:

“We need to get rid of the thinking and mentality that women need help to establish themselves in a world ruled by men, and we need to recognize women’s authenticity, which can not only contribute but has a leading role at this time of transformation.

The topic is much bigger than how many engineers we will have tomorrow or whether they are men or women. Today, we have to mobilize the talent of both women and men and work with everyone’s intellect and freedom to create the future. The New Time requires a totally different view and approach to the role of women in a changing world.” 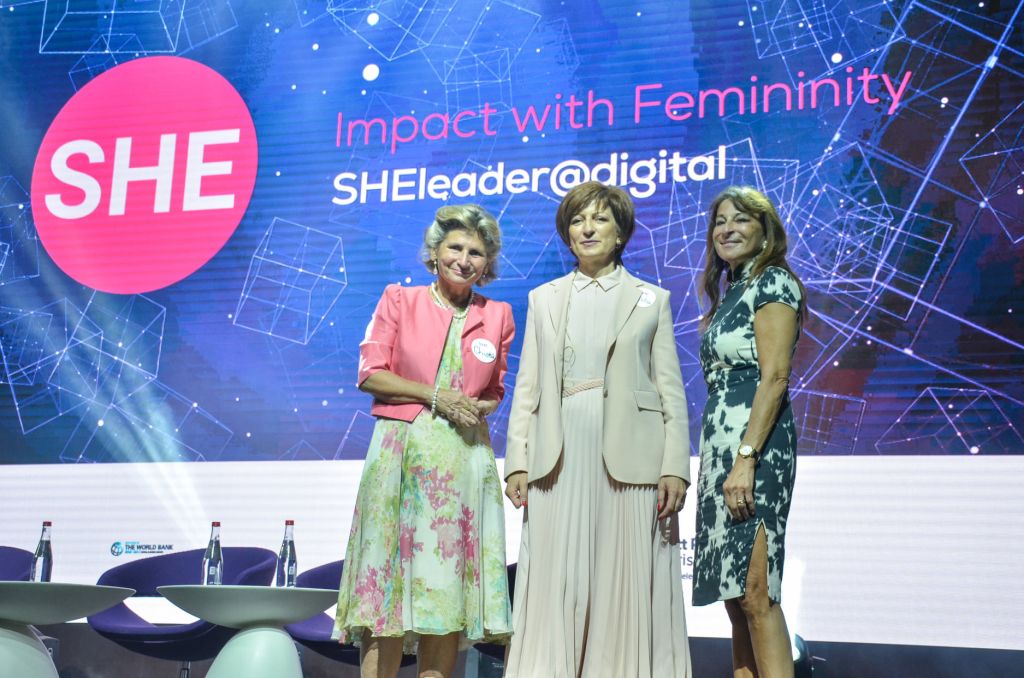 From left to the right: Chiara Corazza, executive director of the Women’s Forum for the Economy and Society, Sasha Bezuhanova, founder of MOVE.BG,, and Borina Andrieu from from Wilmotte & Associés. Photograph: Tihomira Metodieva.

*The article is written together with MOVE.BG.