It’s not just about women, it’s about leadership in the digital world

What united participants at the international SHEleader@digital Conference 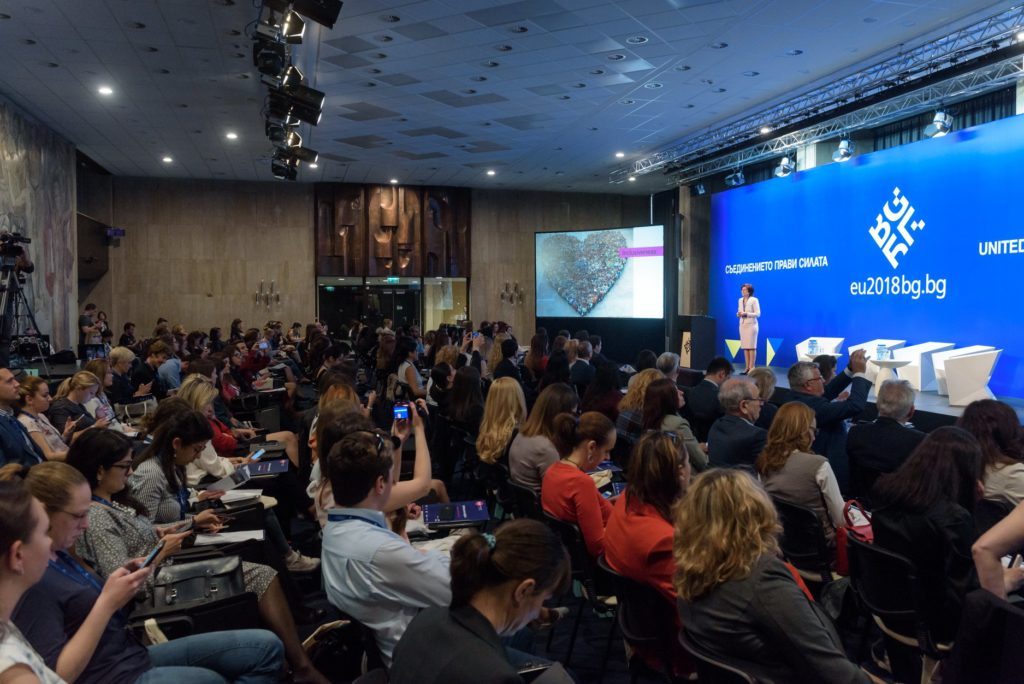 On April 12 in Sofia took place the international SHEleader@digital Conference 2018, dedicated to the key role of women in the digital era. The Forum gathered more than 200 business, non-profit and public sector representatives from fifteen countries, all confident that the dynamically evolving digital economy needs sustainability and more female participation.

In the course of the intense discussions and presentations, emerged a clear outlook that women have the strength and capacity to take on leadership positions, but in order to develop their full potential, strategic actions are needed. A concrete step in this direction is the Women leaders@digital for Europe Coalition, initiated by the Bulgarian Center of Women in Technology (BCWT) at the event. It aims to create a platform for partnerships of incentives, stimulating the female entrepreneurship and the participation of more women in technology and digitally-based industries.

“The challenges of the transforming world we live in require new thinking and new approaches, men and women working together with their talent and ideas in finding the solutions for tomorrow. We organized SHEleader@digital to stimulate the dialogue on the leadership in the digital era, to support female entrepreneurship and to build a bridge between today’s professional leaders and the new generation of innovators.” stated the founder of the Bulgarian Center of Women in Technology and MOVE.BG Sasha Bezuhanova in her welcome keynote speech. 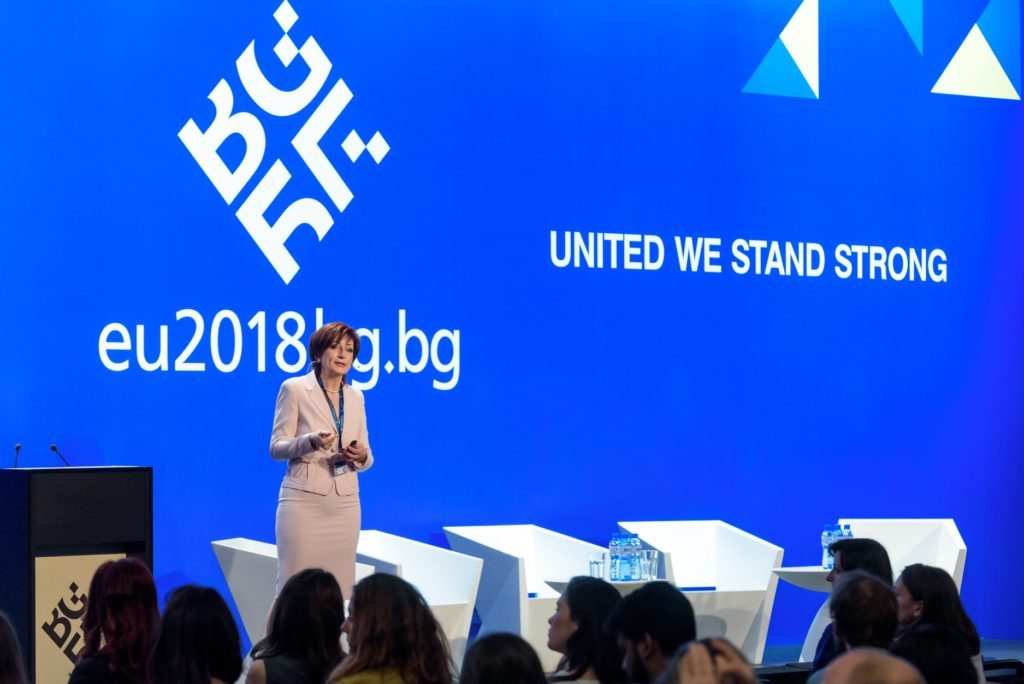 SHEleader@digital is organized by the Bulgarian Center of Women in Technology (BCWT), in partnership with the Ministry of the Bulgarian Presidency of the Council of the European Union and the European Commission and was held under the official patronage of the EU Commissioner for digital economy and society Mariya Gabriel.

“There is no doubt that Europe’s future is digital and it should be inclusive. In this sense, women’s role and participation in Europe’s digital transformation is crucial,” Gabriel said in her speech and stressed that “no one should remain excluded from the possibilities offered by the digital technologies and a conference like this is a big step forward.” 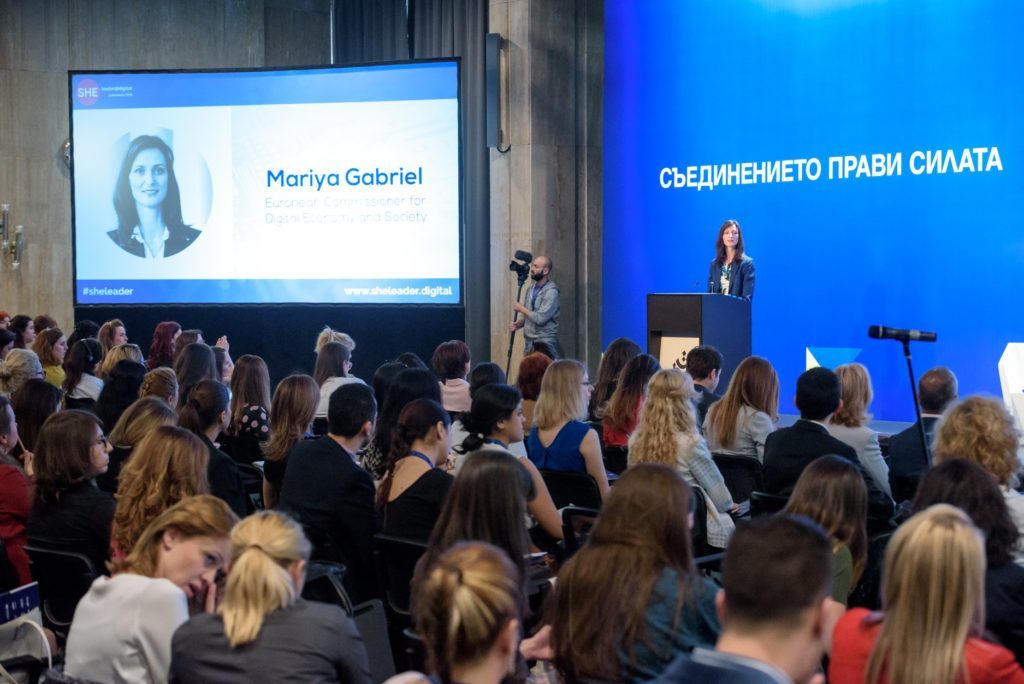 Divided into four main sessions, the SHEleader@digital conference looked at the contemporary role of women through leadership, entrepreneurship, new technologies, and work-life balance. Outstanding leaders and entrepreneurs from all over the world arrived especially in Sofia to take part in SHEleader@digital and to share their experiences and inspire with their personal success stories.

Lina Salanauskaite from the European Institute for Gender Equality (EIGE) presented for the first time data from a survey focusing on gender equality in the digital sector and work-life balance. According to survey results, similar positions in ICT are held by women and men with different qualifications, which imply additional steps in education for women. Salanauskaite added that the issue is far from being limited to digital and engineering skills, but also to the motivation of young girls. In this sense, efforts to attract more women to the technological professions and, respectively, the branching of stereotypes, should be directed to earlier life stages, even before adolescence. Lina Salanauskaite pointed out that the remarkable 31% share of women IT specialists in Bulgaria not only contrasts with 17% on average for the European Union, but show radical differences opposing to certain member states. 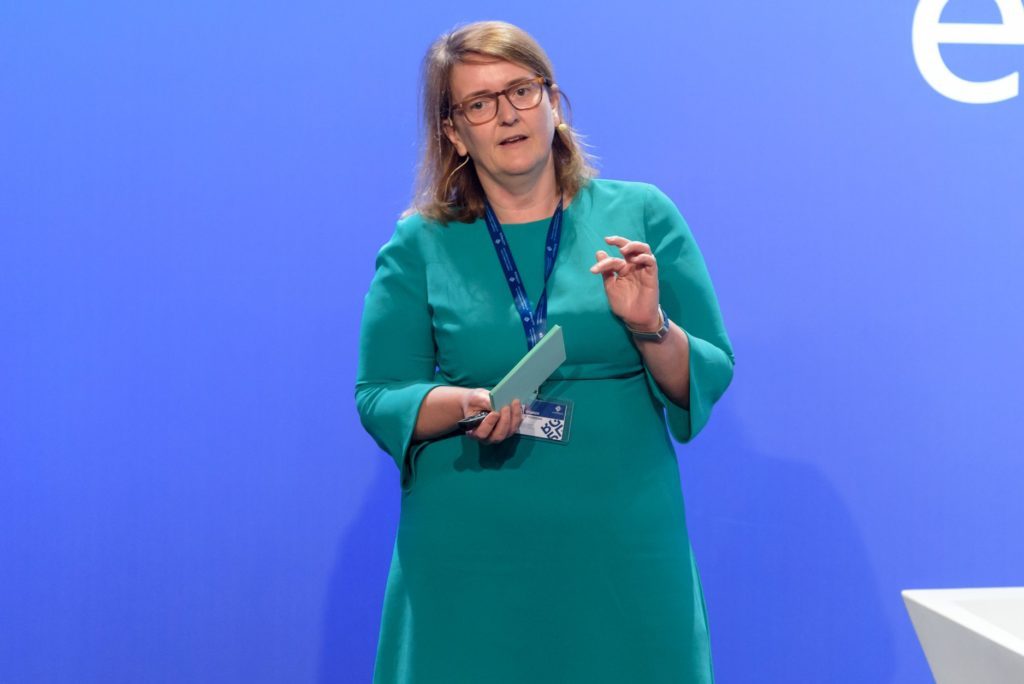 The Chief Product and Information Officer at Financial Times Cait O’Riordan also noted the benefits to businesses of a more comprehensive approach to talent selection. Along with the ability to engage diverse customer base and success in a broader specter of markets, stronger ideas originating from the synergy of contrasting approaches, O’Riordan focuses on the sustainable development commenced from the equal opportunities of women and men. O’Riordan also announced the opening of a new FT office in Sofia focused on product and technology roles. 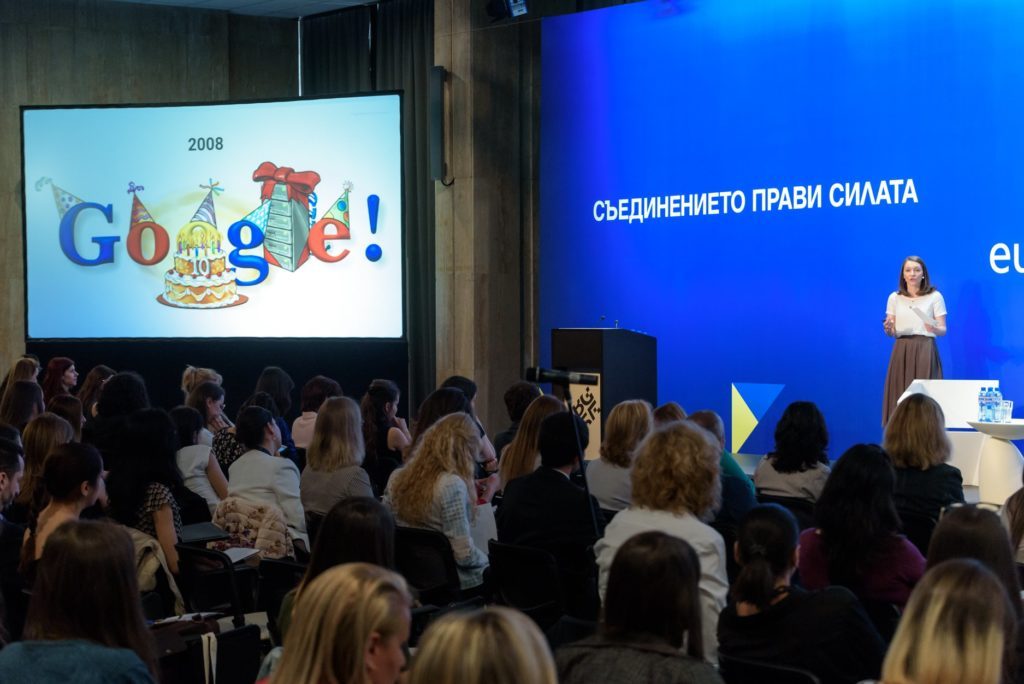 Mina Dimitrova, Head of the Central Go-To-Market EMEA at Google, called on the audience to be loyal to themselves, take risks and find role models and career supporters. “We have to think more often, whether we would say the same about the man” she added.

According to Mary-Jo de Leeuw , the most important thing is for women to help other women in the battle for higher professional standards which, of course, do not depend on gender.

Their stories on the road to success and to a better balance between personal and professional life, economic success and social impact were also highlighted by leaders from different areas such as Rumyana Trencheva, Managing Director for Southeast Europe at SAP, Larisa Best, President of the Luxembourg Business Angels Network, and Branding and PR specialist Liissi Toom at Estonian Persoonibrändi Agentuur. 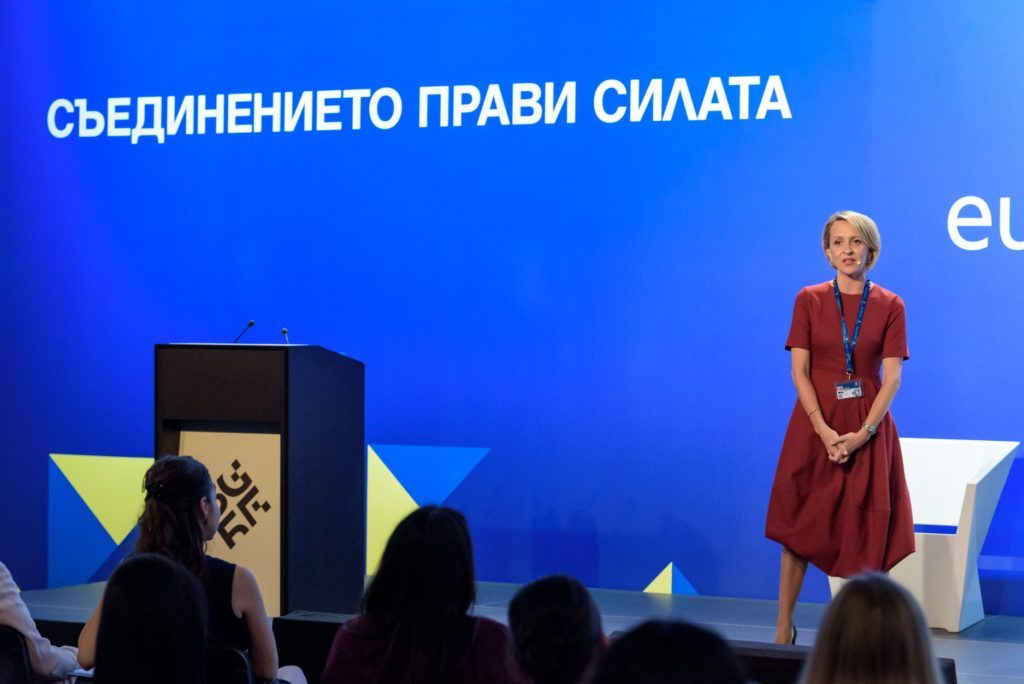 The conference paid special attention to the funding of start-ups created by young women. Five business ventures of social significance were presented. Lubomila Jordanova presented the latest initiatives of the environmental organization PlanA, based in Berlin. Food Revolution’s Magdalena Pashova shared her experience in promoting healthy eating. Iva Gumnashka showed the way underprivileged groups can contribute to digital transformation through the Human in the Loop model. Ina Abadjieva told the story of the imposition of Rosey’s Mark and the unsuspected taste qualities of Bulgarian roses in an international context. And Olga Mineva from EMPROVE emphasized the benefits of integrating gaming principles, or gamification, into the prevention and fight against violence. 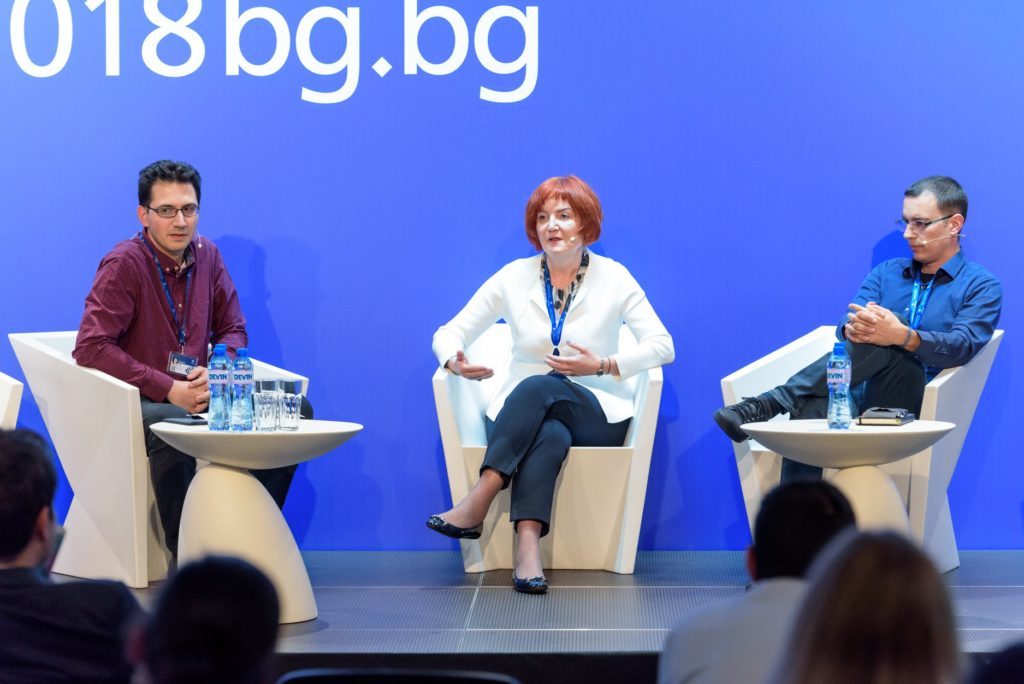 Statistics show that in 2016, for example, only 2% of venture capital was attracted to women-led companies. Therefore, after the five socially oriented start-ups, the question of financing was discussed in a fireside chat between Marzena Bielecka, Managing Partner and Founder of Experior Venture Fund and Vasil Terziev, partner at 11.2 and Co-founder at Telerik Academy.

SHEleader@digital’s youngest participants were three of the finalist in Entrepregirl, a competition for girls entrepreneurs, who shared stories about their career development following the contest. With particular excitement was welcomed the announcement that the next edition of the competition, to be held in September 2018, will be international. 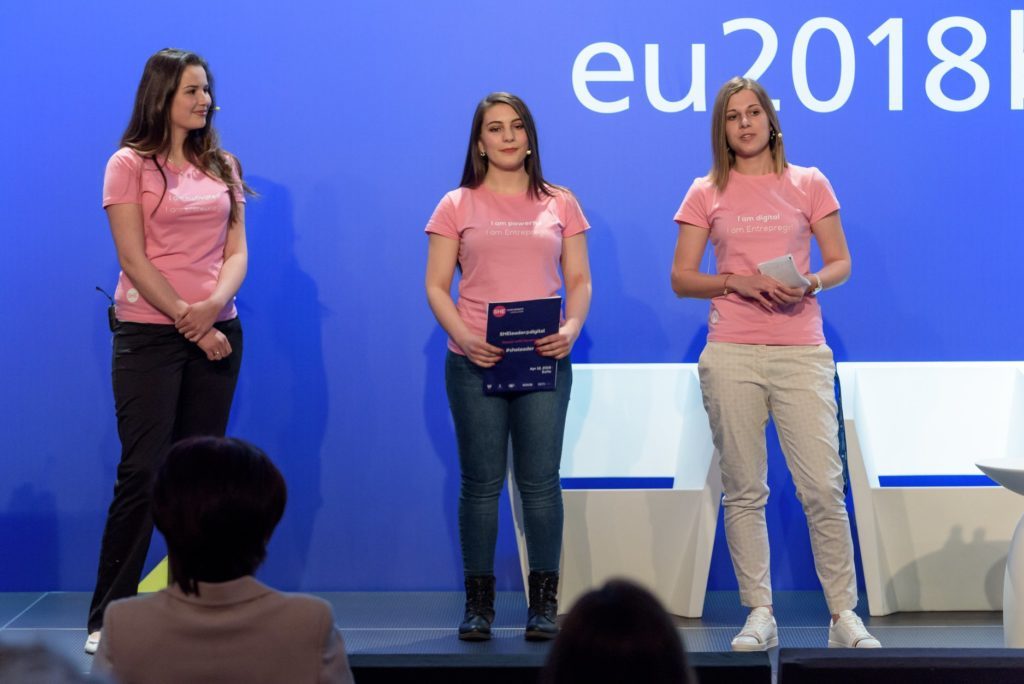